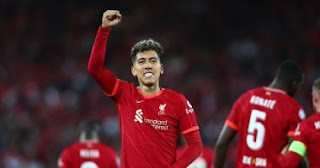 A positive 3-3 draw was decided by the Liverpool team, against its Portuguese counterpart, Benfica, which was held on Wednesday evening at “Anfield”, the stronghold of the Reds, in the second leg of the Champions League quarter-finals for the current season 2021-2022.

Liverpool defender Ibrahim Konate scored the first goal for the Reds in the 21st minute, while Gonzalo Ramos tied the Portuguese team in the 32nd minute.

In the second half, Brazilian Roberto Firmino scored a double for the Reds in the 55th and 65th minutes, and the Portuguese team scored two goals through Ramon Yarmichok in the 73rd minute and Dorin Nunez in the 82nd minute.

The first leg between the two teams ended with Liverpool winning 3-1 in the match that took place between them last week at Benfica Stadium in Portugal, bringing the total of the two matches 6-4 in favor of the Reds, which guarantees qualification for the semi-finals and collides with the Spanish team Villarreal.