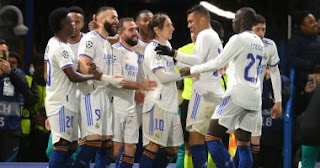 The sky of Madrid is currently witnessing heavy rain, a few hours before the start of the second leg of the 8th round of the Champions League, at the Bernabeu, between the Spanish teams Real Madrid and Chelsea, England, where the first leg in London ended with 3 goals for Madrid against one for Chelsea. The match is scheduled to take place at nine in the evening.

Real Madrid managed to achieve a great victory over its counterpart Chelsea, by three goals to one, in the first leg of the quarter-finals, thanks to a hat-trick from its French star Karim Benzema, and this victory was the first in the history that Real Madrid achieved against Chelsea in all competitions, to break that. Royal” “The Blues” knot, which lasted for five previous matches.

Real Madrid needs to win or draw with any result, or even lose by one goal, to qualify for the semi-finals of the Champions League, while Chelsea needs to win by two goals to adjust the cuff and impose additional runs, or win by three goals in order to overcome an obstacle Royal Club and crossing to the Golden Square.

Real Madrid returns to the Champions League competitions, after winning an exciting victory over Getafe with a clean double and boosting its lead in the Spanish League with 72 points. On the other hand, Chelsea achieved a moral victory over Southampton by half a dozen goals in the 32nd round of the Premier League competition, before facing Real Madrid.