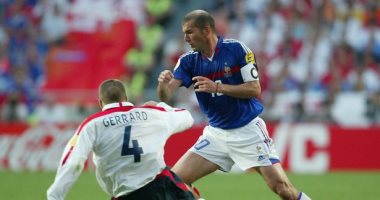 You may forget a match and you cannot remember its events, and you may forget players with their eyes and do not remember their names when one of your friends reminds you of them, but it is very difficult to forget the wonderful goals scored by the stars of the round witch, whose names are immortalized in the football records, and have remained stuck to this day in everyone’s mind.

“Today’s Goal” is a daily report in which we present to you a group of the most beautiful football goals scored by the game’s top stars.

The draw for the Euro 2004 tournament put the defending French national team in one group with its English rival, so everyone around the world was eagerly awaiting their match, considering it an early final for the tournament, and the match was already up to these expectations.

The England team succeeded in advancing during the first half through former midfielder Frank Lampard, with a goal, and the result remained this way until the end of the original time of the match, which assured everyone that the England team had won the match, but what the legend Zinedine Zidane did was shocking to everyone.

A direct free kick was obtained by Claude Makelele in front of the penalty area, after being obstructed by Emile Heskey, to be saved by Zizou, who hit the ball in the net amazingly, scoring the equalizer in the 91st minute, but what is crazy is that Thierry Henry got a penalty after just one minute After being obstructed by goalkeeper David James, due to a fatal mistake by Steven Gerrard, Zidane also tackled it and scored the winning goal in the 93rd minute in front of the astonishment of the whole world, to end the match with a score of 2-1 for France, and it remains one of the most interesting matches in the history of football.