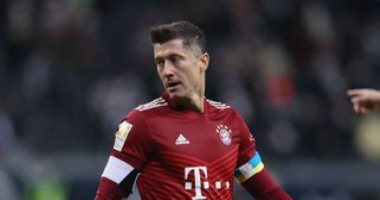 The Polish star Robert Lewandowski, Bayern Munich striker, was keen to provide support to the Ukrainian people and stand with them in light of the war that Russia is waging during the current period, and published a picture of him through his personal account on the Instagram website, and wrote, “As an athlete, I cannot pretend that nothing happened, standing with Ukraine “.

The Russian military operations, which were announced by Russian President Vladimir Putin on Ukrainian soil, have been ongoing since last Thursday, as they entered their third consecutive day on Saturday. According to a statement by the Ministry of Defense of Ukraine.

The US Permanent Representative to the United Nations, Linda Thomas Greenfield, stressed during her speech at the Security Council that everyone should know that Russia chose war, explaining that the draft resolution condemns Russia’s aggression and supports Ukraine’s independence, adding that Russia violated international law by attacking Ukraine, reiterating the sovereignty of Ukraine. Ukraine and its territorial integrity, and called on Russia to withdraw its forces from Ukraine immediately.

Laporta alludes to the approach of the Polish Lewandowski to Barcelona