Paris hosts tonight (9:00 p.m.) the match that decides the champion of the 2021-22 Champions League and that faces two great footballers, Liverpool, and Real Madrid.

The Anfield club announced that both Thiago and Fabinho are recovered from their respective ailments, after fears about them, and are available to reappear."

Lewandowski annihilates the dream of Salzburg (7-1) 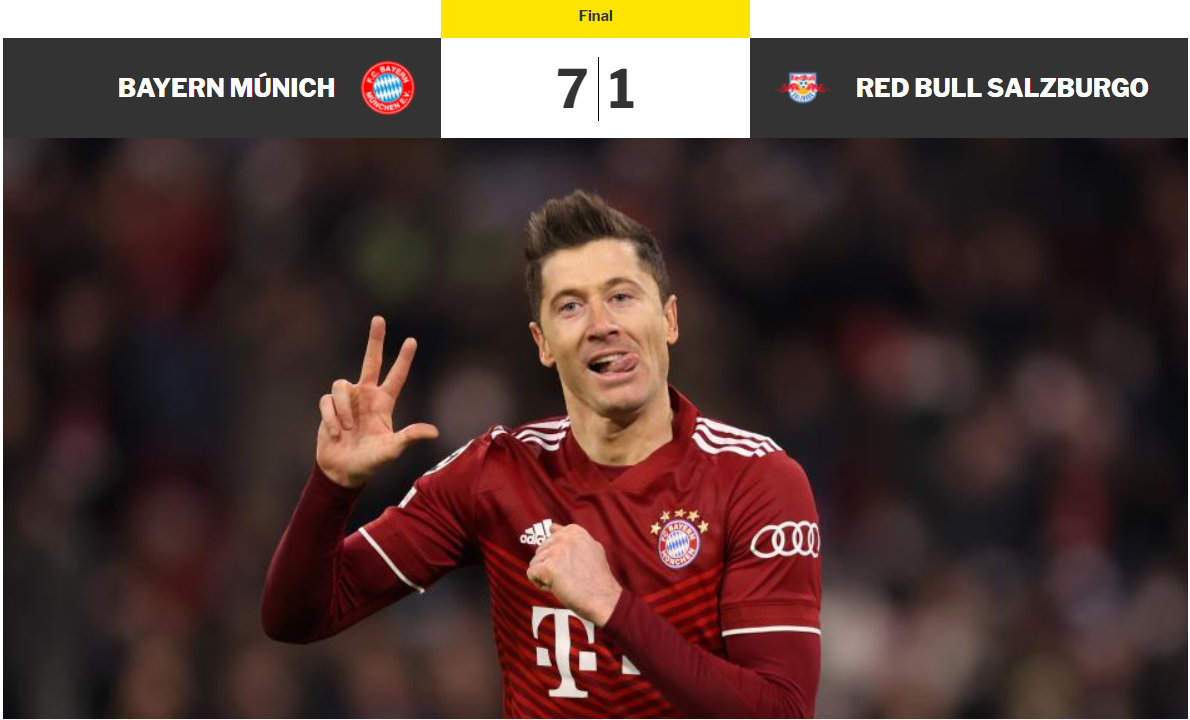 A devastating Robert Lewandowski annihilated Salzburg’s dream of eliminating the almighty Bayern Munich and, with a ‘hat trick’ in just 11 minutes, settled the tie at the Allianz Arena (7-1) after the surprising 1-1 recorded three weeks ago in Austria.

Bayern arrived with doubts about the game they had been showing in recent weeks, including in the first leg against a Salzburg team that surpassed them for many phases, but Lewandowski cleared them up by assuming responsibility from the opening whistle.

Lewandowski, ambitious from the initial whistle

Already in minute 2 the goalkeeper Philipp Köhn took a hard low shot from the Pole and, although Salzburg in the next play was able to advance in a shot by Nicolás Capaldo that miraculously deflected Kingsley Coman in extremis, the Bavarian machinery gave no chance to surprise.

Lewandowski opened the scoring in the 11th minute by receiving from Thomas Müller and being brought down by Maximilian Wöber after controlling and turning on himself in a high-quality maneuver. After ruling the VAR that the foul was inside the area, the Bayern striker opened the penalty marker.

Salzburg, even with the 1-0, could lavish some of the quick transitions attacking the spaces that dismantled Bayern in the first game, but Manuel Neuer, in his reappearance after a month off, provided security to his defense of three center backs, who again showed signs of weakness in an error by Benjamin Pavard. Nicolas Seiwaldl took advantage of it but the German goalkeeper put a saving hand (15′).

In the 22nd minute it was 2-0 in an action similar to that of the first goal. This time Leroy Sané put the ball to Lewandowski, who in an attempt to control it was brought down again by Wöber. The Pole did not fail this time either from the fateful point by deceiving Köhn.

Lewandowski, insatiable, also made it 3-0 in the 23rd minute. Thomas Müller put a pass into the gap on the counterattack, Köhn came out of his area, but the clearance tripped the striker, the ball went missing towards the goal, hit the the post and the Pole, who was lucky on this move, pushed it into the net at an empty goal with his thigh. It is his 85th goal in 104 Champions League games.

With this hat trick, Lewandowski has scored 12 goals in the current edition of the Champions League and displaces Sébastien Haller (Ajax), who has 11, to the top of the list of top scorers in the tournament.

With the game already decided, Serge Gnabry joined the party with the 4-0 lead by receiving from Jamal Musiala and placing a cross shot (31′). Salzburg still tried to get into the game with two attempts from Andreas Ulmer (35′) and a subdued Karim Adeyemi (45′), but Neuer was always very sure.

In the second half, Bayern, as on their best nights, did not let go. Thomas Müller made it 5-0 after receiving from Leroy Sané and turning around in the box (54′). Maurits Kjaergaard saved the Austrian honor on a counterattack with a shot to the near post (70′).

In the last moments, Bayern returned to the charge and Müller achieved his double by pushing a pass from Sané after great collective action. Sané himself established the 7-1 by shooting Köhn in another stellar intervention by Lewandowski, who put the icing on his display with a heel assist.

The Anfield club announced that both Thiago and Fabinho are recovered from their respective ailments, after fears about them, and are available to reappear."
Virgil Van Dijk

LIVERPOOL star Virgil van Dijk has revealed his dream five-a-side team - and it DOES NOT include any of his team’s strikers.