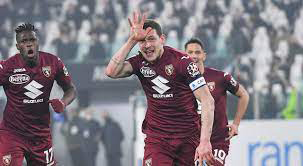 Andrea Belotti scored a second half goal to help Torino draw 1-1 with Juventus in the Derby della Mole.

Both clubs had periods of dominance, but Torino controlled the majority of the match. Josip Brekalo and Wilfred Singo provided ample creativity for El Toro, unafraid of Juventus’ defensive corps. At times, the hosts were unable to penetrate the midfield, and Bremer’s presence at centre-back neutralized their forwards.

On the other side, Torino finally got their captain and star striker back. Belotti made his first start since November, leading a talented midfield that included Tommaso Pobega and Sasa Lukic. Singo and Mergim Vojvada played at wing-back, while Ola Aina remained on the bench.

In the opening moments, Belotti nearly got his side off to an ideal start. He broke into the box and appeared to be tackled from behind, but the referee decided not to call a penalty.

Despite Torino winning the early minutes, Adrien Rabiot created the first opportunity for his side. A brilliant ball from Zakaria found the midfielder in open space. The Frenchman drove the ball into the box, but he wasted his one-on-one shot against Vanja Milinkovic-Savic.

However, the Bianconeri did not miss their next chance. On a corner kick, Juan Cuadrado’s ball found Mathijs de Ligt at the back-post, and the centre-back put his side in front from close-range.

The first half ended with neither club managing many scoring opportunities. Despite the deficit, Torino played up to Juventus’ level and controlled possession for several long spells.

After the break, Allegri brought on Mattia de Sciglio for Pellegrini, who appeared to have picked up a knock. Torino immediately went after the defender, attacking down his channel with Singo. On a counter, the left-back made a crucial tackle on the Ivorian, denying El Toro a prime scoring chance.

Juventus’ injury troubles worsened shortly thereafter. After Dybala took a strike from distance that almost doubled the lead, he signaled to the bench for a substitute. Allegri chose Weston McKennie to replace the Argentine, as the American could provide creativity in the attacking midfield.

McKennie quickly found his footing, combining with Zakaria for the next Bianconeri chance. The Swiss midfielder, who was in electric form, played his teammate into the box, but Bremer stopped the attack with an excellent challenge.

Just when Juventus seemed to be building momentum, Belotti left his mark on the match. Josip Brekalo whipped in a hard cross from the left wing, which found the striker in front of the goal. Unmarked, the Italian international ripped a ferocious volley from close-range, bringing the match level with 30 minutes to go.

Allegri made two last-minute changes, desperately trying to change his side’s fortunes. He removed Vlahovic for Moise Kean, and Arthur replaced Manuel Locatelli. Both players had quiet matches, largely due to Bremer’s strong form at centre-back.

In the dying moments of the match, Juventus managed a handful of chances. However, the favorites were unable to break the deadlock, and the Derby ended as a draw.