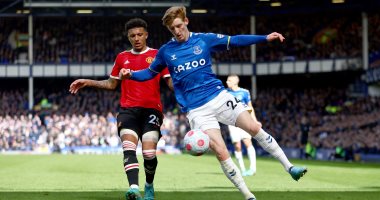 Manchester United fell 1-0 to Everton during their match at Goodison Park in the 32nd round of the Premier League.
Everton’s goal was scored by Anthony Gordon in the 27th minute of the first half with a powerful shot that changed direction, and Manchester United goalkeeper De Gea could not catch the ball.