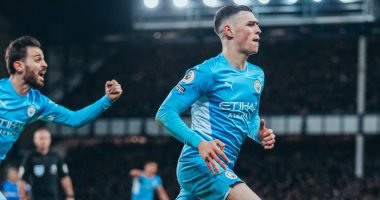 The English club Manchester City snatched a fatal victory from its host Everton, with a goal free of charge, in the confrontation that took place between them this evening, Saturday, at “Goodison Park”, in the 27th round of Premier League for the 2021-2022 season.

Phil Foden scored the winning goal for Manchester City against Everton in the 82nd minute of the match.

Manchester City regained its balance after the sudden loss against Tottenham in the last round at the Etihad Stadium, a defeat that ignited the atmosphere in the Premier League, as it helped Liverpool get closer to City.

Man City had fallen at home to Tottenham 2-3 in the last round of Premier League.