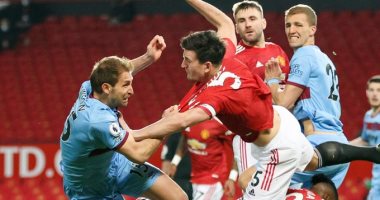 Today, the eyes of the football fans are heading to the “Al Ittihad” stadium to follow Premier League summit in Round 28, when Manchester United will be a guest of rival Manchester City.

Manchester City leads Premier League standings, having scored 66 points, and is six points behind second-placed Liverpool, but coach Jurgen Klopp’s team has a game less in his tally and Manchester United occupies fourth place with 47 points, seeking to collect the three points, which also concern him for Continuing the struggle to be in the semi-finals, and thus qualifying for the next edition of the UEFA Champions League.

Manchester United seeks to collect the three points, which are also important to them, in order to continue the struggle to be in the semi-finals, and thus qualify for the next edition of the Champions League.

The Manchester derby will be a fierce struggle between the two teams, in light of the desire of each team to win and collect the three points, and Manchester United fell into the trap of a negative tie against its guest, Watford, in the match that brought them together at Old Trafford in the twenty-seventh round of Premier League. Premier League for the current season 2021-2022

For his part, the Spanish coach Pep Guardiola, coach of Manchester City, praised the Portuguese star, Cristiano Ronaldo, the Manchester United striker, and Guardiola spoke during the press conference of the match, saying, “One of the greatest players in the last 15 years alongside Messi, it was interesting to watch him all these years. Avoid his danger near the goal, we have to control him, mentally he is always strong, deals with pressure without problems and lives his career with a positive outlook.”

He explained: “The whole time Manchester United were competitive, last year we competed for the title, and we always had great respect for their history and quality.”

He added, “We beat Man United at their home more than here, but there is no specific reason for that, and I will sign immediately for losing the derby and achieving the Premier League title at the end of the season.”

Guardiola announced the absence of Robin Diaz and Nathan Ake, saying: “Robin Diaz will continue to be absent for 4-6 weeks due to a hamstring injury.”

For his part, Ralf Rangnick, coach of Manchester United, confirmed that the team’s striker Marcus Rashford has great talent as a modern striker, adding that he will do all his energy to develop his level during the coming period.

“Now that Cavani is ready for the next matches, at least, we have other options,” Rangnick said in the press conference for the match against Manchester City, adding, “With Marcus Rashford, we have another player behind him constantly and I will work with him to develop him.”

Rangnick added in his statements about Rashford, “We’ve seen it with other players in the past and I don’t understand why this shouldn’t happen with Rashford,” explaining, “Rashford has great talent, has speed and fitness. He has everything you need from a modern striker, and not only if He was playing from the wing or in the middle.”

“I will do everything in my power to help Rashford take the same path that the other players have taken in the past three months,” the Manchester United coach continued.

Rangnick talked about the level of the team, saying, “We created a lot of chances in the last 10 or 11 games, and we need to take advantage of those opportunities and turn them into goals.” “We did it against Leeds but against Watford we should have scored one, two or three goals. I would be more worried if we didn’t create chances but the way we played and created is good.”