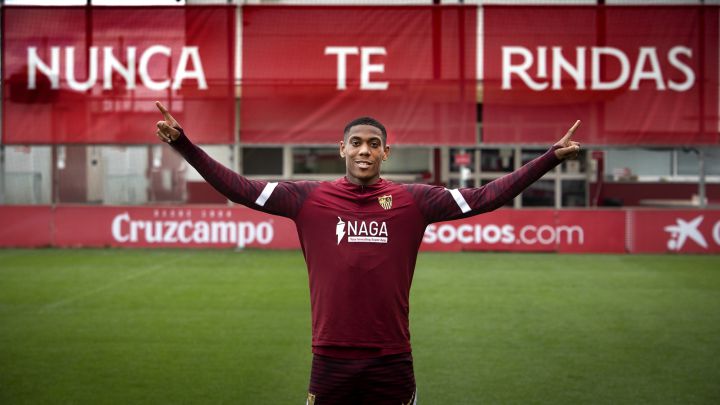 An injury stopped the adaptation of Anthony Martial (Massy, ​​France, 1995) when he began to make a difference at Sevilla. He is now ready to go for West Ham, a team he is very good at.

First of all, that injury he had. Will we see him start against West Ham?

I feel much better in the last few days. I’ve forgotten the inconvenience and I’m ready to play from the start if Lopetegui wants.

How are these weeks of adaptation to Seville and the city?

The city is great and we are a good team. And I’m playing, so I’m happy. During these last rainy days Seville looks like Manchester (laughs), but when I arrived every day was sunny. You get up, you see the sun and you feel happy.

When you arrived in Seville, in England they told us that you were quite reserved, that you didn’t smile.

I think people don’t know me. They still don’t see me smile, but in real life, I’m always smiling. The field does not reflect how I am, because I am focused on football. But I’m a pretty happy person.

The signing of him was forged for many weeks. But not even Rangnick’s arrival prevented him from leaving Manchester.

I asked United to leave because I wanted to play. Ragnick arrived and I wanted to leave, so I told him. He told me that if he wanted to continue, the way he was training me, he was going to play. But I needed to find a new atmosphere, a new club. Although I still have a contract there, I don’t know what will happen when the season is over. Here I am only on loan until the end of this campaign.

I had many options, but I spoke with Lopetegui and Monchi and for me coming here was the best. They made me feel important. He wanted to play and enjoy football again. I wasted some time in Manchester not doing it and I needed it.

Did you have hopes of winning LaLiga when you signed for Sevilla?

The club’s objective is not to win LaLiga. We are in a very good position, but we only watch game by game and do our best. Right now, we are second, but the reality is that what we want in the end is to be in the Champions League.

But the Europa League does have to be won…

I know it is a very important competition here, they have won six trophies in 15 years. We have to do what we can to achieve it again because the final is also at the Sánchez-Pizjuán.

And to continue in Europe, West Ham. His favorite victim in England, he scored seven goals. An opportunity to vindicate yourself before the people of United?

I’ve always been good at it, although I didn’t know the exact number of goals. But I don’t care what people say about me, really. I just want to score there for Sevilla to win and go through to the next round.

What do you know about the hammers?

I know Zouma and Areola from the French team. They have a good team and their fans will put a lot of pressure on them. But we have to do our job and come back here with qualifying.

From France, I also knew Koundé. How about him?

He is a very good boy, young and with many qualities. Very professional. He is already a great center-back and he can become one of the best. He speaks my language and is helping me because my Spanish is bad and I have little time to learn it.

Tell us some differences between the Premier and LaLiga. Referees, for example.

Referees are different. In England, they leave more contact, in Spain with small contacts they call for a foul. But they are human and they are wrong in both places. Regarding the way of playing, in Spain all the teams want to have possession, play with the ball. They are more technical. In England, he is faster and more physical, but I like both championships.

What does Lopetegui ask of you?

He wants me to play as I know how, but also to adapt to the team and put a lot of intensity. Sevilla is an intense team in terms of pressure, also without the ball. Julen is a good coach, you notice it in how he lives the games from the sideline. He gives us players a lot of energy.

In LaLiga he has also met and will play against him, one of his idols: Karim Benzema.

For me, he is the best striker in the world, perhaps with Lewandowski. Karim has been showing his quality for many years, it’s a pleasure to watch him play. He is also a great guy. I’m so glad he’s having another great season.

Why were you nicknamed ‘little Benzema’ in Lyon?

They always compared me to Karim, and to other strikers, because he was a boy from the Academy. I watched him play and wanted to be like him, so good. We have played together in France; it is something very nice.

He has also been able to play with Cristiano in Manchester. Is it true that he is not well in the locker room?

Cristiano is a top professional, one of the best in history. We all love him, there are things that are said in the media that are not true. I was in that locker room and I know what happens.

The last. Do you see yourself in Qatar?