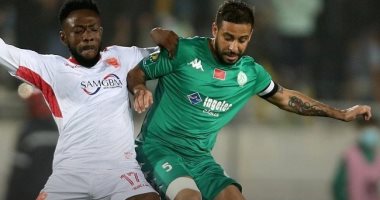 Raja vs Houria match
Moroccan Raja achieved a difficult victory over its guest, Houria team of Guinea, with a clean goal, in the meeting that brought them together, on Friday evening, at the “Mohammed V Stadium”, as part of the third-round competitions of the second group of the African Champions’ League group stage for the current season 2021-2022.
Mohsen Metwally scored the goal of Raja’s victory in the match in the 67th minute of the match, to bring the Moroccan team 3 points, achieving the full mark in the group stage.
Moroccan Raja strengthened its lead in the second group standings in the Champions League with 9 points, while the Guinean Houria team remained without a balance of points.
The South African team, Amazulu, defeated Algeria’s ES Setif with a clean goal, earlier today, Friday, in the same group.
Amigo Mimila scored the goal of the South African team, Amazulu, in the 42nd minute of the match.