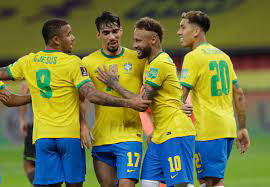 Brazil scored an easy victory against Paraguay, with four clean goals, in the match that was held between them at the “Mineirao” stadium, as part of the sixteenth round of the South American qualifiers for the 2022 World Cup in Qatar.

Rafinha scored Brazil’s first goal 3 minutes after the start of the first half, but the video technology canceled the goal after the ball touched the player’s hand before scoring, but the same player came back and scored again in the 27th minute, taking advantage of a wonderful long pass from Marquinhos, to receive it and hit the Paraguay net.

Philippe Coutinho added the second goal for Brazil in the 62nd minute with a powerful shot that the Paraguayan goalkeeper could not prevent, and Anthony strengthened Brazil’s lead with the third goal in the 86th minute, and Rodrygo scored the fourth goal in the 88th minute.

Paraguay stops at point 13, occupies ninth place, and loses the opportunity to qualify for the 2022 World Cup in Qatar.

The Brazilian national team entered the match with a formation consisting of:

Brazil tied with Ecuador 1-1 in the 15th round of World Cup qualifiers, while Paraguay lost 0-1 to Uruguay in the same round.