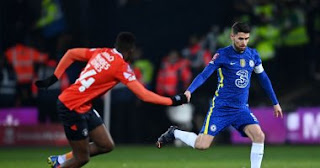 Luton Town led Chelsea 2-1 during the first half of their match, which is currently being held at “Kenilworth Road”, as part of the fifth round of the FA Cup.

Harry Kornik scored the second goal for Luton Town in the 43rd minute of the match, which is currently being held at home.

The Chelsea team, led by German Thomas Tuchel, seeks to reconcile its fans by winning today, after losing the English League Cup title earlier this week against Liverpool, the professional in its ranks, the Egyptian star Mohamed Salah.

Liverpool grabbed the title from the Blues’ fangs, with a penalty shootout 11-10 after the end of the original and extra time in a negative tie in the confrontation that took place between them at “Wembley” in the Carabao Cup final in the current season 2021-2022.

While Luton Town achieved victory in its last match at the expense of its guest team, Derby County, with a single goal to none in the match that brought together the two sides within the activities of the Champions League.

Chelsea occupies third place in the Premier League standings with 50 points from 25 rounds, after winning 14 matches against falling into a draw in 8 other matches, and experiencing the bitterness of defeat in only three matches.

Luton Town is currently in sixth place in the Champions League standings in the second division in England with 54 points from 33 rounds, during which it won 15 games against loss in 9, and also fell into the trap of a tie in the same, and in terms of goals average, he scored 46 goals in the goal His rivals in return for entering 37 goals in his net.

The Premier League is close to agreeing to sell Chelsea to...

FA Cup: Summary and goals of the Chelsea match against Crystal...