UEFA Women’s Champions League| 1- 3: Remontada of Barcelona that puts the pass to the semis on track 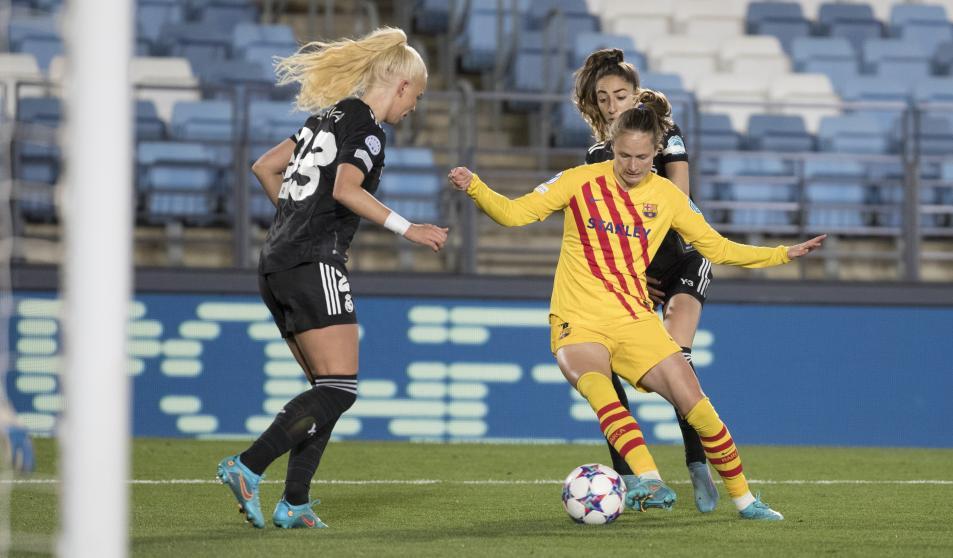 Barcelona suffered more than necessary but left more than on track to go to the semifinals of the Women’s Champions League. The azulgrana were surprised by an initial goal from an uninhibited and more intense Madrid, the work of Olga, and they didn’t turn it around until the second half. By converting a revised penalty from the VAR, Alexia and Claudia Pina, who entered the break, were in charge of completing the comeback and the captain herself extended the advantage in added time.

It seemed that Giráldez’s team was once again stuck with Real Madrid outside the Johan Cruyff, as happened in the Super Cup. Despite a start in which the azulgrana, who also played with the ‘Senyera’ in Valdebebas, had come out to bite, the one who first sank their teeth was Alberto Toril’s team. In a transition where she caught the Barcelona defense out of position, Esther held on in front for Olga Carmona to enter, who took advantage of the lane left by Torrejón. The forward of the merengue team, who yesterday played in black at home, had time to adjust the ball to cross it against Paños and open the scoring after 8 minutes.

A goal that left Barcelona touched. The azulgrana were not comfortable in the first half in which Madrid, pushed by a crowd that almost filled the Alfredo Di Stéfano, played without complexes and looked into the eyes of the current champions of everything. In fact, Giráldez did not put Misa to the test until the 25th minute, when Patri Guijarro loaded his leg from the front. The Madrid goalkeeper, who is used to showing off against the Catalans, blocked down.

It seemed that Barcelona was beginning to react and Jenni Hermoso, in the next action, had a header that went very close. It was the best opportunity of the first half, where Barcelona was unable to overcome a good Madrid that could even go into the break with a greater advantage. After receiving near the right vertex of the area, Esther turned around and shot at the crosshead when Paños already seemed beaten.

Giráldez tried to shake up his team at the break. He left Leila, who had been booked, in the locker room, and Pina entered to pass Rolfo to the left side.

And Barcelona took five minutes to equalize the clash. It was thanks to a controversial penalty that the referee had to go look after being notified by the VAR. Misa missed the ball and Olga Carmona knocked Hansen down. The Finnish Lina Lehtovaara pointed it out after reviewing it on the screen and Alexia, with all the calm in the world, was in charge of transforming it.

The goal made Barcelona react, although they still did not have the game under control. Paños gave a ball to Esther who shot high and Pina responded after a good action by Rolfo on the left. The shot from the quarry also went over the crossbar.

But it wasn’t the best day for the Catalans, who still couldn’t find the formula to overcome the web designed by Toril. As the minutes went by, Madrid showed physical wear and tear and the azulgranas approached Misa’s area, especially in the last quarter of an hour of play, but without risking too much so as not to be surprised by some Madrid counterattack, the best weapon of local ones.

Aitana warned with a high shot, but Pina, ten from the end, ended up knocking down the wall. The youth team, who celebrated the goal by kissing the shield, caught a dead shot at the penalty spot after a shot by Aitana blocked by the merengue defense and crossed it far from Misa’s reach.

In fact, the Madrid goalkeeper put up her fist at the last moment to deflect a bounced ball that had been poisoned. But in addition, she couldn’t do anything when she came face to face with Alexia. The best player in the world poked the ball over her and scored the 1-3 that left the tie on track.

Barcelona knew how to suffer but ended up taking the match and practice, except for a major surprise, they certified the pass to the semifinals. He will have to seal it next Wednesday at the Camp Nou, in a match for which there are no tickets left.